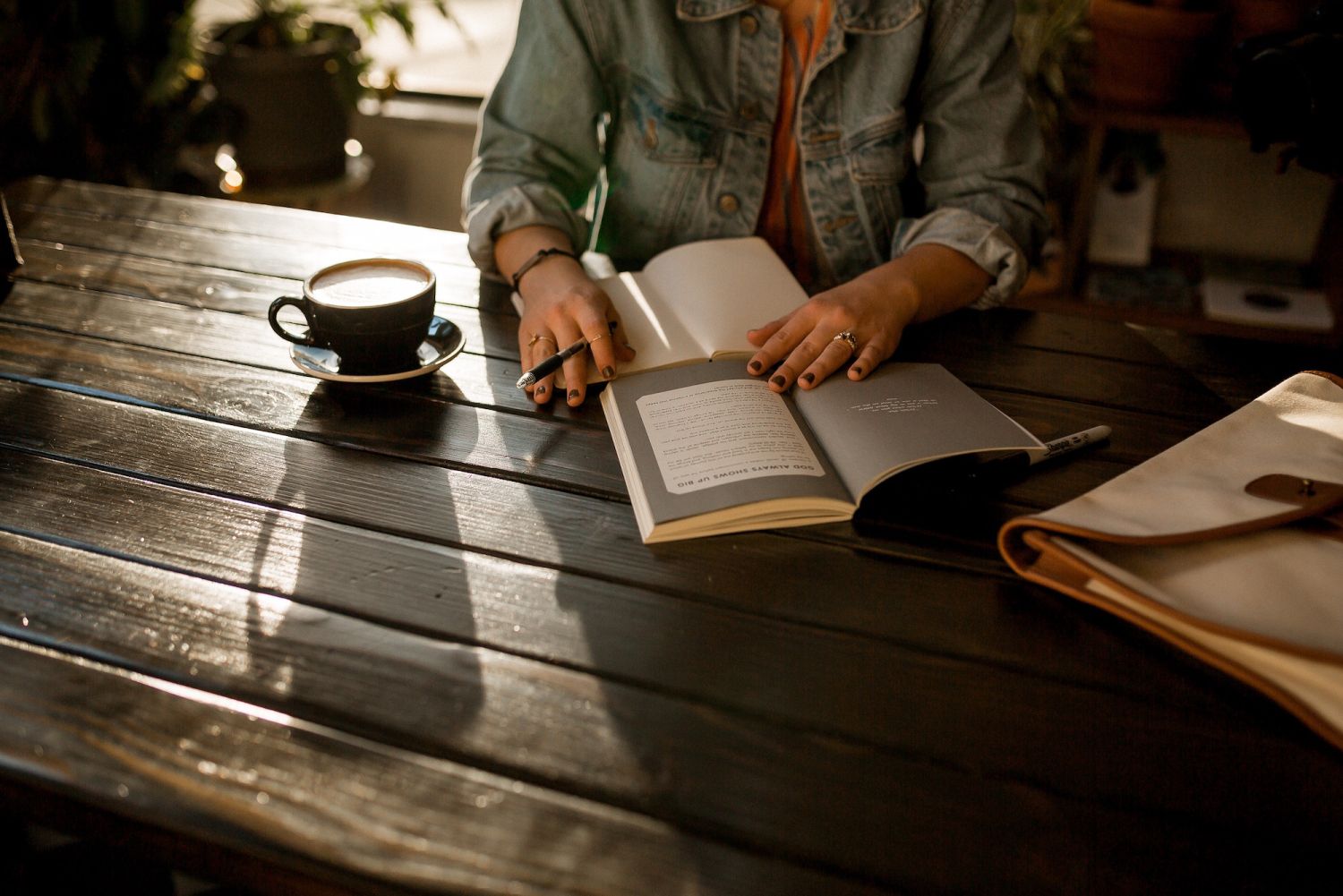 Photo by David Iskander on Unsplash

Note: This post was originally published on my blog in April 2008.

Right now I’m reading a book called The Last Report on the Miracles at Little No Horse. The author, Louise Erdrich, is one of my favorite writers. I first learned of her when I was a freshman at Dartmouth. About fifteen of us who’d designated creative writing as a potential major were invited to meet with her and her husband, Michael Dorris, at the Montgomery House, where they were living as fellows and resident scholars.

I don’t remember much about the meeting, except that they served tea, cookies, and chocolate covered strawberries. The authors gave us some advice, then invited us to ask questions. I’d never raised my hand to ask or answer a single thing in thirteen years of public education, but now, newly collegiate, I was surprisingly bold.

My question: “Everyone always tells writers to write what they know. But we’re only eighteen years old and nothing’s happened to us yet. What are we supposed to write about?”

Louise fielded that question. Unfortunately, I don’t remember what she said, because I was too intoxicated with the nausea of having spoken aloud to actually listen to her response.

I went on to take one creative writing class at college, later that year. It was workshop style and terrifying. There, I learned that while I was reading mystery and horror novels, the rest of my class had been rolling around in copies of Granta. I was stuck on high-concept, humor, and plot; everyone else was writing about abortions, disappointing sex and the tragedy of being a misunderstood young person. (None of these were things I’d experienced, because I was too busy reading.)

My freshman Intro to Creative Writing seminar taught me that I had no idea what “good writing” was, nor how to emulate it. And because I was still a kid, with no sexual hangups, no arrest record and no real problems with my friends or family, I was unsatisfied with the advice to write what I knew. I was smart enough at eighteen to realize I didn’t know anything; this was why I was going to college. I wanted somebody to teach me something.

I learned a few things in my seminar, I liked my fellow students, I got a little praise for my over-the-top comedic short stories, but ultimately dropped the program when I realized studying creative writing meant majoring in English. I was planning to major in anthropology.  Thus ended my formal education in the craft of writing.

Because I didn’t continue with formal creative writing studies, I can’t say for sure how undergrad students are taught writing in a university setting. But based on my limited experience, it seemed pretty free-form: here are some books on writing, here are some writing prompts, here are some writers you should be reading; now go do it. Imitate these famous writers, using their style until you develop your own. But still, write what you know.

I imitated famous writers when I wrote; but the famous writers I’d been imitating were not the right ones. They were too fantastical and plot-driven. They sold too many books to be good. And they most certainly didn’t focus expressly on writing what they knew. To the best of my knowledge, Stephen King has never had contact with aliens.

Yesterday a friend and I were talking about our writing experiences and books we’ve been reading. He reads sci-fi, action novels, and fast-paced thrillers. I read everything, generally alternating between plot-centered genre novels and literary fiction.

We determined that regardless of genre, the difference between a good book and a bad one is how good the author is at problem-solving—getting characters into legitimate fixes, then getting them out (or getting them further mired, but with skill). A good book has conflict and subjects its protagonist to setbacks. In a bad book, nothing happens. People just stew in their own juices for 200 pages, trying to find the answer to the eternally self-absorbed question, “Who am I?”

In a great book, the author gets the answer to that question while answering a host of others that are more interesting to the reader. A great book answers both “What if?” and “Who am I?” while taking the reader for a ride. A great book tells more than just one story. A really great book may tell dozens.

All this musing has made me think again about how people are taught to write in college and in graduate writing programs. Is there enough emphasis on problem-solving? It’s a logical-creative process, one that’s prized in all fields, and for that reason I wonder if it’s under-appreciated in writing, a field that likes to keep itself and its special brand of creativity apart from the mundanities of other disciplines.

I think separating problem-solving from creative writing is a mistake, though. Problem-solving can be highly intuitive. Anyone who’s spent any time studying screenwriting knows that it’s the most important skill at play in writing any project. You can make cool descriptions and dialogue until you’re blue in the face, but if you can’t concoct a juicy problem for your protagonist to experience, then you’re not doing your job. You’re not giving the audience something to go through. You’re not giving them any reason to feel.

Problem-solving is something we all do, every day, just to get through the day. Every morning when we wake up, we solve the problem of how to get out of bed.  When we start our cars, we solve the problems of getting out of the garage and onto the freeway. When we get to work, we solve an endless series of problems—how to meet quotas, further goals, or Twitter with friends when our bosses aren’t looking.

Humans are organic computers, constantly making little calculations. For this reason, the act of problem-solving—large, meaningful problem-solving—is something we like to see replicated in literature, film and TV.  Good storytelling is all about a character navigating the major road blocks of life, and finding the ingenuity to get around or over them. Watching people get over character-defining obstacles reminds us that when the time comes for us, we can do the same.

A friend mentioned on her blog several weeks ago that she uses movies as a way to help her brainstorm solutions to problems in her own life.  After 9/11, the United States government hired screenwriters to consult with them about potential methods terrorists might use against us. Every day, business people with needs hire consultants to imagine their future problems, then construct solutions for them.

All of us are problem-solvers; therefore, all of us are storytellers. Therefore all of us, whether we realize it or not, are writers.

Sophomore year in college I applied for and got a job working in the Composition Center, helping my fellow students polish their grammar and write better papers. During our orientation, the heads of the center made a big deal out of telling us we were excellent writers, the cream of the campus crop, and that we were charged with using our talents to help other students excel.

Somewhere in here lie two problems I have with attitudes surrounding career writers (not all, but some):

1. They set themselves apart and above others;
2. They hire themselves out to improve upon other peoples’ ideas.

There’s nothing wrong with #2. It pays well, comes easily and can be really fun. But because writers are so good at putting words together, often style is emphasized over process. Writers aren’t always seen for their ability to think. Instead, they’re considered to be the “final polish” to somebody else’s insight. Somebody else puts in the parts; we’re brought on to do a detail job on the fenders.

This is one of the things I like about the direction the Internet is taking: blogging, website copywriting and other forms of written communication have become so integral to doing business that writing now is problem-solving. It’s widely accepted in the business world that storytelling is a persuasive and successful way to win business, brand a product, and sell things. Telling a good story can be the difference between making or breaking a company; solving the problem of getting readers’ attention is job one for nearly everyone producing web content.

In a nutshell, everyone online is trying to solve the same problem: how to tell audiences a satisfying story.

This is great for the audience, and good for writers, too, but only if we know how to move our readers through their obstacles.

Which brings me back to how writing is taught in school, and where the emphasis lies.

Most writers studying creative writing at the undergraduate or graduate level are not planning on producing web content or working as ad copywriters.  They’re hoping to become the next U.S. Poet Laureate or to write the next Great American Novel. I don’t blame them. That’s what most creative writers want, myself included. Idealism is good. Purity of purpose is fine. That’s what you’re supposed to feel when you’re in school.

My question is this—why does purity of purpose have to be at odds with the idea of financial success? Why do teachers of fiction so scrupulously avoid teaching mainstream or genre books, or heavily plotted stories with lots of twists and turns? Isn’t there something to be learned from studying successful, resonant storytelling that moves product?

I’m not saying those stories are good, necessarily, but they are popular, and therefore successful. Shouldn’t writers-in-training take some time to learn why?

Which brings me back to that meeting at the start of my writing career, in the fall of 1992. Back when I sat, frustrated, wondering why everyone was telling me “Write what you know.”

Writing what I know doesn’t tell me anything new, least of all about myself.

But using writing as a way to think through something I don’t know is a great way to define an obstacle and thereby work my way around it. That process of inquiry is itself a story. Asking my questions is the inciting event. Pursuing the answers is my plot. Getting stuck halfway through the process is my turning point. And having an epiphany is, well… my epiphany. Problem solved. The End.

Maybe the number one piece of advice young writers in training should be given is not “Write what you know” but “Keep asking questions.”

That, to me, seems like a better way to keep yourself, and your audience, interested in where you’re going.